Daughter bans Parents from her Wedding

Alyssa Pearce from Australia composed a “uninvitation” to ban her parents from attending her wedding, and this has now gone viral.

She told Buzzfeed that during her childhood, she suffered physical, emotional and sexual abuse at the hands of the people who were supposed to love and cherish her.

Family pressured her to include them in her nuptials, so she finally decided to send them her version of an invitation.

“I opened up a Word document, found the nicest calligraphy font I could, loaded up the printer with some of the lovely parchment paper left over from the other invitations, and wrote. I then found a nice matching envelope, addressed it with a fancy gold pen, and posted it. I mean, if you’re going to send someone a memorable ‘stuff you,’ you’ve really got to put in some effort. You may as well go all-out,” she recounted.

Pearce initially posted her parents’ “uninvitation” on Reddit, where most comments are mostly supportive of how she chose to handle the situation. Some even call her a hero. 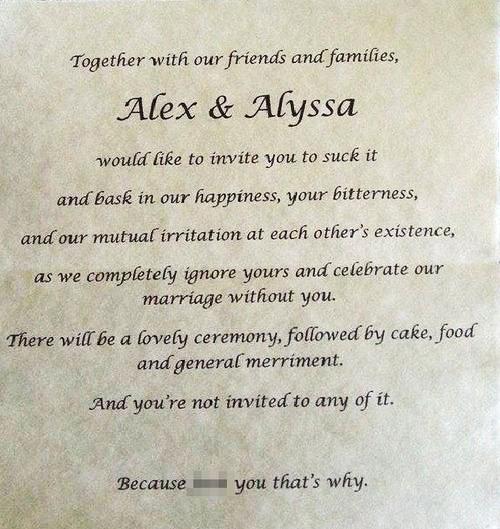